I believe that the world is a Karmic place: any good that you do for someone else will come back around to you eventually. That’s why I always say, “Generosity pays.”  [Tamara Box]

Where does the story start?  Could you please tell us about your background?

A Texan by birth, I graduated from high school in Houston and headed off to Baylor University in Waco on an academic scholarship.  It didn’t take long for me to figure out that I would struggle to expand my mind in a place where everyone looked, sounded and had a background virtually identical to me.  When my Economics professor recommended the London School of Economics to me, I jumped on the opportunity to escape the homogeneity of Texas and experience some of the diversity of the rest of the world.

Within days—perhaps even hours–of my arrival, I was in love with London.  After receiving a degree in Monetary Economics from the LSE, I took a detour back to the US to get a degree in international law at Georgetown Law Center in Washington, D.C., but when the time came to interview for my first job as a lawyer, I chose to speak only to those firms which had thriving London offices.  For two years I worked in the New York office of a major international firm; then I started pushing for an assignment abroad.  Instead of London, they sent me to Singapore!  However, it was there I found my true passion in the world of finance—and also my future husband, an Englishman.  I moved back to London in 1997, qualified as a British solicitor, and became a British citizen.  This is my home.

Why did you become a lawyer?

I was apparently such an argumentative child that everyone always said I would be a lawyer.  I don’t think I ever considered doing anything else.  Talk about the power of suggestion…

Can you tell us about the work you do?

Have you read about the financial crisis of 2008?  I used to do the stuff that was blamed for it.  Here’s the short story:  over time, complex financial structures that were effective in raising capital and creating income for global clients became corrupted through a lack of oversight, a failure to perform adequate risk evaluations, and basically, a rush of greed that drove everyone and his brother to throw together deals that benefitted nobody but the salesperson who got paid a commission to fill in blanks on paperwork that the signatories didn’t understand.  The securitisation industry (of which I was a part) became the scapegoat for the irresponsibility of various individuals.

For about six years after the Lehman bankruptcy, I spent most of my time helping clients unpick the deals that had tied up their funds and derailed their financing objectives.  Now I still work in capital markets, securing financing for institutions, fund, corporations and sovereigns; the industry is thriving and opportunities abound as economies strengthen, fuelling growth and expansion in many global market segments.

You are the Managing Partner of Reed Smith (EMEA), what have you learned about people from leading a large organisation?

People are unpredictable!  And that’s a good thing—because that means that diversity is working to open our eyes to innovation, experimentation, risk-taking, and generally the introduction of new ideas about everything from processes to problem-solving.

Homogeneity sucks the soul out of a business, stagnating product development and narrowing markets.  At Reed Smith, our people are our product, so they have to be constantly innovating, thinking creatively, imagining new ways of doing business, and implementing novel solutions to client matters.  I am happy to say that not only do we have a diverse workforce—all the way up and down the ladder—but we VALUE that diversity.  We know—and our clients know– that it is key to our success and theirs.

If your client only remembers one thing after working with you, what do you want it to be?

I like to think of my role as problem-solver, not problem-spotter.  There’s no point in talking about problems without also talking about solutions.  I always tell my team that bringing me a problem obligates them to bring a suggested solution at the same time.  Maybe that will be the one that works, or maybe after brainstorming, we will find a better one.  But whatever the case, we are always working toward “yes” (even if it’s a “yes, but…”), which is the only answer I ever want to give a client.

If my clients remember only one thing after working with me, I want it to be that I will always find a way.

If you weren’t a finance lawyer what might you be doing now?

Since I was predestined to be a lawyer from a very young age, it’s hard to imagine being anything else.   My fantasy might be to be a professional shopper—although my husband thinks I pretty much do that now, except that I am my only client!

Realistically, if I weren’t a finance lawyer, I would probably be an investment banker.  There’s something professionally gratifying about helping clients find the best solution to fund their acquisitions, growth and development.   If that makes me sound like a complete finance nerd, I’m not embarrassed by that!  I have a lot of respect for nerds.

I know you are a big fan of mentoring and sponsoring people?  Can you tell us what you have learned by being a mentor / sponsor ?

Mentoring is a two-way street; I get something from every interaction I have with another professional, even those who are not in my industry.  You may know that I am Chair of Women of Influence, an initiative for Cancer Research UK in which female cancer researchers are mentored by women from business, politics, or academia.  The scientist I have mentored over the past two years is a very perceptive, diligent, intelligent young woman from whom I have learned a great deal, not the least of which is how to pace myself so as not to expect instant results every day.  (I’m still working on the patience part of that.)

Perhaps more directly, I believe that the world is a Karmic place: any good that you do for someone else will come back around to you eventually. That’s why I always say, “Generosity pays.”  It isn’t a direct quid-pro-quo kind of payment, but someday, somewhere, the world will reward you for your actions.

What do you like to do in your spare time?

Spare time?  It’s hard for me to separate the things I do professionally from the things I do for myself.  I enjoy networking and spending time with great women and men, talking about politics, careers, families, fashion, or whatever.  Is that business?  Or spare time activity?  There’s no difference, really.

I’m also a bit of a classic car nut.  Just last week I spent five days driving my 1969 280SL Pagoda across France in an all-female Classic Car Rally called the “Rallye des Princesses.”  With my great friend from Canada as my navigator for the second time, we met women from all over Europe on this adventure; we didn’t win, but it was so much fun that we’re planning to go for a third time next year!

Favourite Place You Have been to / Favourite Holiday?

Ever since I left Texas, I have been on a quest to see the world and meet the people who inhabit it.  I have to make up for lost time, you see, and discover the diversity that I was missing for the first twenty years of my life.

Is there one favourite I could name?  Probably not; they’ve all been my favourites at one time or another.  Perhaps the best answer I could give here is that my favourite holiday is “my next one!”

Since I became a mother, I have taken on an additional travel mission: to take my son to the world’s most interesting places.  Sometimes that means going to someplace I’ve already been; sometimes that means exploring a new area together.  He’s an avid reader, so he frequently asks to go to a country mentioned in one of his books; this summer it is Cambodia, because he read about Angkor Wat and is now eager to see the Temple and explore the region.

Tell me something you have learned about the business world?

At the risk of sounding trite or political, I will say, “There’s more that unites us than divides us.”  I firmly believe that business benefits more from cooperation than competition.  For example, I have been a founder of a number of groups within my industry, and have always welcomed into membership other lawyers who also do business in those segments.  I’m not worried about their poaching my clients; rather we can all develop open relationships with those businesses and with each other so the best solutions to their issues can be found.

Even across industries, I think the business world has more commonality than we might think.  Most of us recognise that our future success depends on innovation—no matter what industry we’re in—and that innovative ideas can be shared across platforms to help all of us get there faster.

What is the best piece of advice you ever got ?

A very successful friend once told me, “Never have lunch alone,” meaning that I should never miss an opportunity to network.  Each contact knows another contact, who knows another contact, etc.  Eating lunch, drinking coffee, attending a lecture, going shopping–every activity is a chance to network.  Probably the only place I haven’t networked is in the ladies room!  (Oh, wait, there was that time. . . .)

I think by following this principle I have gotten my “six degrees of separation” down to one or two in just about any professional context.  You need to know someone?  Ask me; I can probably find you a contact!

Co-founder, president and editor-in-chief of the Huffington Post Media Group, one of the world’s most influential news and information brands.

Please click here for our interview with Arianna Huffington 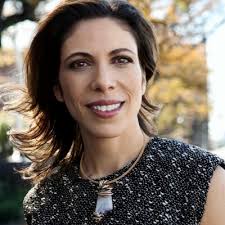 Linda was named one of “America’s Best Leaders” by U.S. News and one of TIME’s 100 “Innovators for the 21st century”.

Please click here for our interview with Linda Rottenberg, CEO