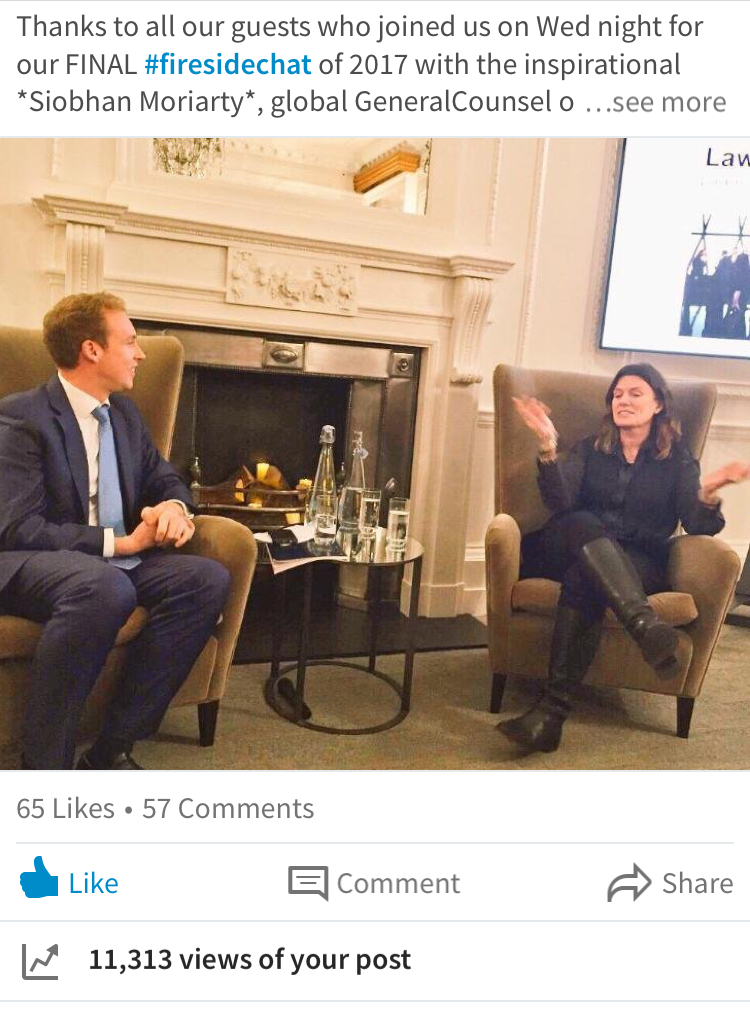 I have a special event planned for the London chapter of the Lawyers BD CLUB which I’m very excited about.

SIOBHAN MORIARTY the General Counsel of Diageo plc (the FTSE 100 company) has confirmed she will be our guest speaker.  She has very kindly agreed to join me for a #FiresideChat.

Siobhan will chat about her personal career journey and share with us lessons she has learned along the way.

It would be great to see you if you were in a position to join us.  It will all be very informal and relaxed so I am sure you would enjoy the evening.

PLEASE EMAIL ME TO BE ADDED TO OUR GUEST-LIST

Siobhán is a graduate of University College Dublin and is admitted as a solicitor in Ireland and in the UK.  She held various positions in law firm private practice in Dublin and London, principally 7 years as a corporate lawyer with Clifford Chance, before joining Diageo’s in-house legal team in 1997.  Siobhán has done a variety of roles in Diageo, including Corporate M&A Counsel, Regional Counsel Ireland and General Counsel Europe, before taking on responsibility for leadership of the global legal team as General Counsel in 2013.  She has been a member of the Executive Committee of Diageo plc since 2013.  Siobhán is also the joint Executive Committee sponsor of Diageo’s diversity and inclusion agenda, which has set itself the goal of achieving 35% female leadership in Diageo by 2020 and 40% by 2025.  Siobhán has previously served for two years as a Diageo nominated non-executive director on East African Breweries Limited, one of the largest listed companies on the Nairobi Stock exchange.  As part of the FT Innovative Lawyers series, Siobhán was recognised for breaking boundaries in the law in the Financial Times list of top 20 global general counsel as part of the 2017 FT Global GC 20 list.  In addition, Siobhán was named as one of the top 50 female champions in the inaugural 2017 FT and HERoes Champions of Women in Business list, recognised for helping to address the gender imbalance in business, “celebrating not just those who have achieved significant success in their own careers, but also those elevating others during their rise through the ranks.  Real change makers, who can be looked up to as pioneers of equality and inclusion”.

Diageo is a FTSE10 company, listed on both the London Stock Exchange (DGE) and the New York Stock Exchange (DEO).  It is a global leader in beverage alcohol with an outstanding collection of brands, including Johnnie Walker, Crown Royal, J&B, Buchanan’s and Windsor whiskies, Smirnoff, Cîroc and Ketel One vodkas, Captain Morgan, Baileys, Don Julio, Tanqueray and Guinness.  Diageo’s products are sold in more than 180 countries around the world.  For more information about Diageo, its people, brands, and performance, visit www.diageo.com. Please also visit Diageo’s global responsible drinking resource, www.DRINKiQ.com, for information, initiatives, and ways to share best practice.

Some of our previous guest speakers

Co-founder, president and editor-in-chief of the Huffington Post Media Group, one of the world’s most influential news and information brands.

Please click here for our interview with Arianna Huffington

Linda was named one of “America’s Best Leaders” by U.S. News and one of TIME’s 100 “Innovators for the 21st century”.

Please click here for our interview with Linda Rottenberg, CEO

What I’ve learned is that fear is not something that should hold you back from what you want to do.

Please click here for our interview with Janice A. Flynn

Don’t lose touch with people you enjoy working with and aim to build long term working relationships.  They are likely to become important to you later in your career.  [Peter King, Partner at Weil]

Please click here for our interview with Peter King

More details are on this link