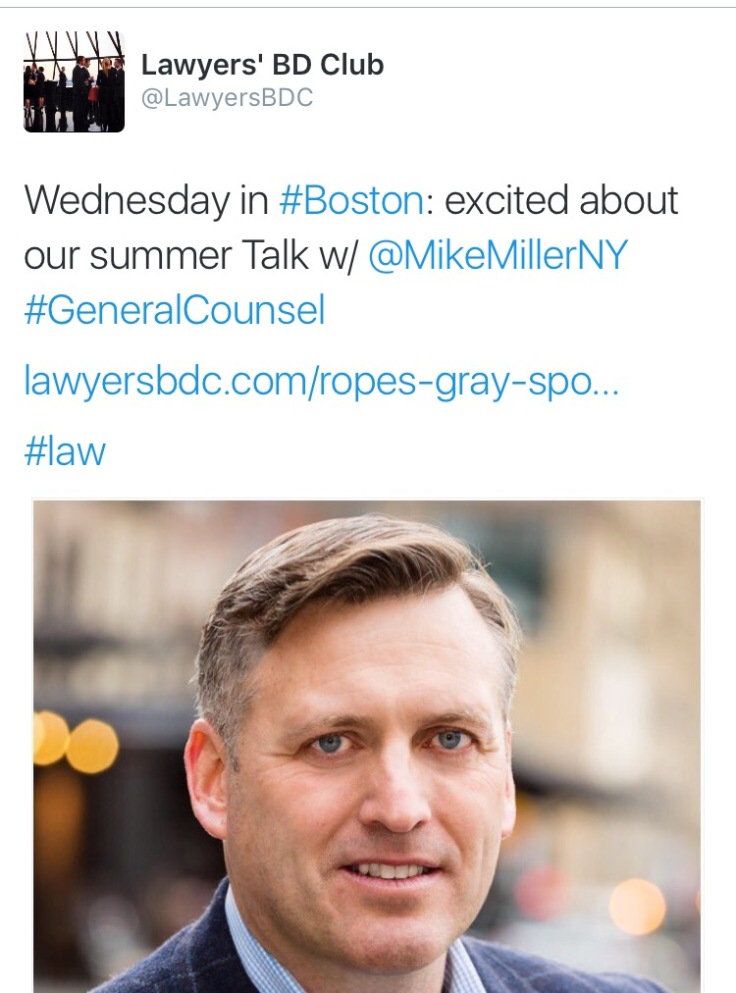 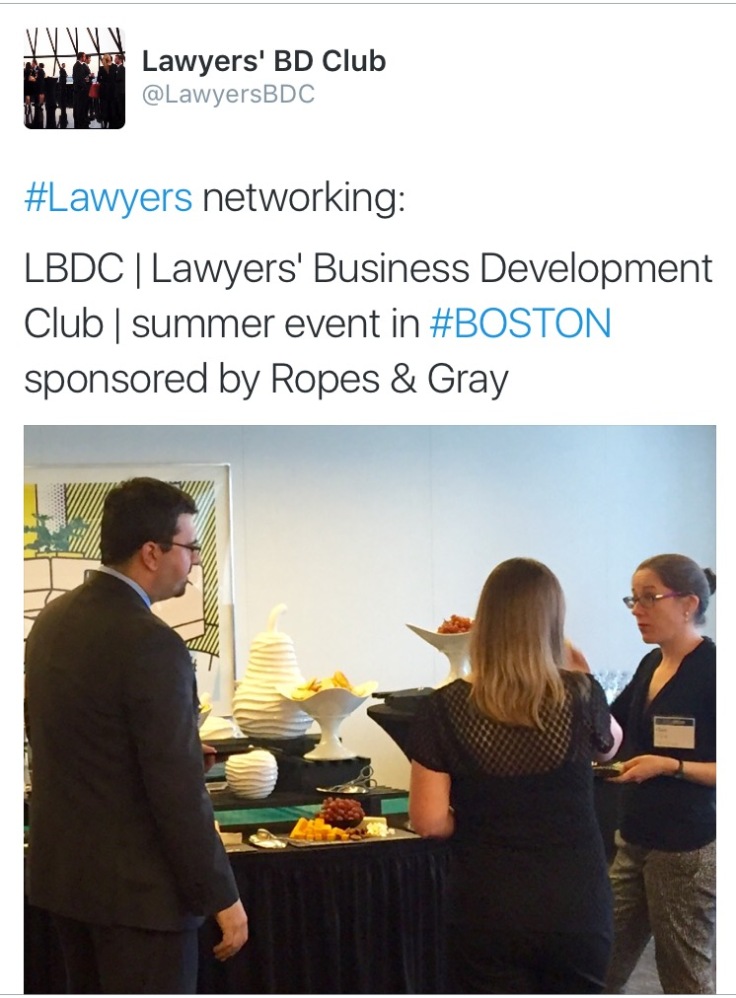 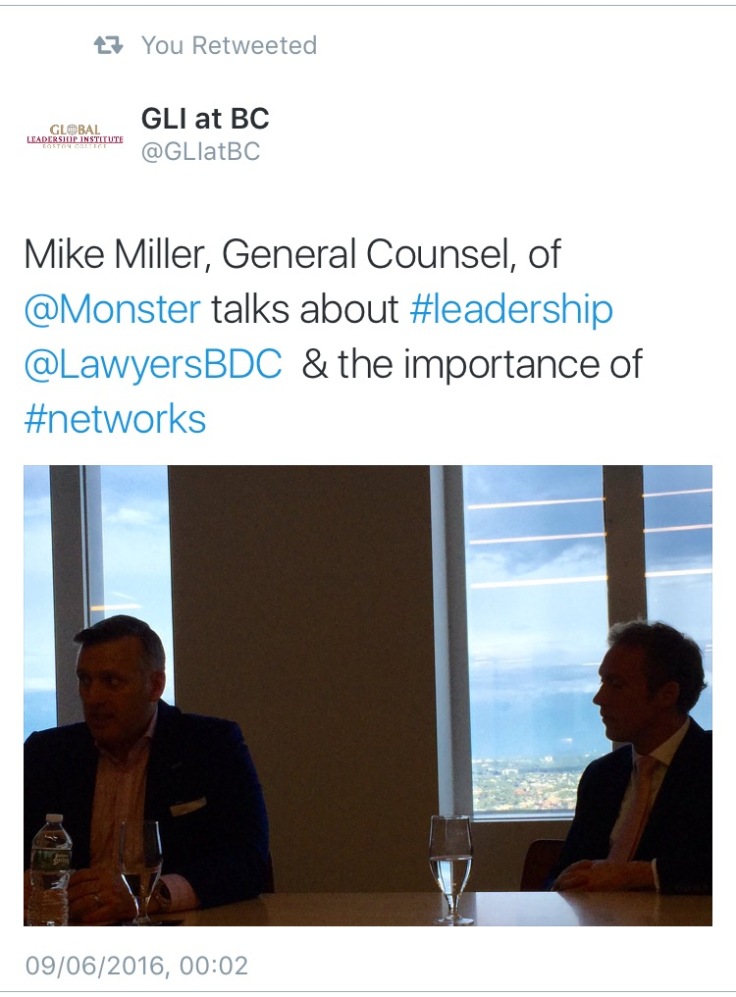 And now some thank you’s.

A big thank you to Mike Miller; our superb guest speaker.  Mike gave us  a fascinating, engaging and very insightful Talk in Boston.

Thanks also to Dr Robert Mauro of Boston College’s Global Leadership Institute and to Ropes & Gray.

Finally our thanks to our guests for joining us in Boston.  It was great to see everyone and to catch up.

Hope to see you soon.

Previously, he had served as Vice President and Deputy General Counsel from July 2008 to December 2008 and as Vice President, Associate General Counsel from October 2007 to July 2008. From February 2007 to September 2007, Mr. Miller was Senior Counsel for Motorola, Inc. From June 2002 to January 2007, he served in various capacities as senior corporate counsel for Symbol Technologies, Inc. Prior to joining Symbol, Mr. Miller was associated with both Sullivan & Cromwell, LLP and Winthrop, Stimson, Putnam & Roberts in New York.

Mr. Miller received his juris doctor from Hofstra University School of Law in Hempstead, New York, where he served as an associate editor of the Hofstra Law Review. He also holds an M.B.A. from C.W. Post, Long Island University and a bachelor’s degree from the College of the Holy Cross in Worcester, Massachusetts.

Mr. Miller serves on the Board of Directors of ACDS, Inc., an organization that provides lifetime resources for individuals with Down Syndrome and other developmental disabilities and their families; the Board of Directors of the St. Anne’s Parish School (Garden City, NY); and as a member of the Finance Committee of the Church of St. Anne (Garden City, NY). He is also a member of the Society of the Friendly Sons of St. Patrick in the City of New York and the Holy Cross Leadership Council of New York. Mr. Miller is admitted to practice in the State of New York and is a member of the New York City Bar Association.

Monster Worldwide, Inc. (NYSE: MWW) is a global leader in connecting people to jobs, wherever they are. For more than 20 years, Monster has helped people improve their lives with better jobs, and employers find the best talent. Today, the company offers services in more than 40 countries, providing some of the broadest, most sophisticated job seeking, career management, recruitment and talent management capabilities. Monster continues its pioneering work of transforming the recruiting industry with advanced technology using intelligent digital, social and mobile solutions, including our flagship website monster.com® and a vast array of products and services. For more information visit http://monster.com/about.

I am very excited about our INAUGURAL SUMMIT on 2 November 2016.

If you would like to receive more details about our special event, please get in touch.  It would be great to hear from you.

We will have some wonderful General Counsel guest speakers including:

You may be interested to know that at our previous LBDC event in New York (30 November 2015), our guest speaker was the inspirational Ricardo A. Anzaldua – The Executive Vice President & General Counsel of MetLife Inc.  Our event was sponsored and hosted by Hogan Lovells.   Some photos from our special event are on the link below:

Photos from our LBDC event in New York with the GC of MetLife Inc.

We had a very special event to mark this 50th milestone; a fireside chat with Bjarne P. Tellmann, the Senior VP and General Counsel of Pearson plc.  The topic for our conversation was:

“Leading Legal Teams In an Age of Innovation and Disruption.”

As some of you may know last October, we had a wonderful fireside chat in New York with Bjarne P. Tellmann (sponsored and hosted by Morgan Lewis).

You may be interested to see some more photos from our celebratory 50th TALK – which you will find by clicking on the link below:

Photos of our 50th LBDC TALK