Last week, Keltie was delighted to host the 50th speaker event for the Lawyers’ Business Development Club at our offices at No. 1 London Bridge in London.  The guest for this event was Bjarne P. Tellmann, Senior Vice President and General Counsel of Pearson Plc, who joined Colin Carroll, the founder of the LBDC, for a fireside chat about his career path and “Leading Legal Teams in an Age of Innovation and Divergence”.

Colin and Bjarne opened with the revelation that they both hold belts at karate (Bjarne is a black belt (“though it’s been a few years…”) and Colin is a brown belt) and Colin asked Bjarne what lessons he had been able to take from the discipline.  Bjarne noted that in karate you need to be able to keep cool, remember to breathe and just react.  It’s important to focus on the moment and learn not to underestimate any opponent, all of which are lessons that he’s taken away into life in general.  The other take away from the world of karate is that attaining a black belt is just the start, you never really attain mastery and there’s always something else to learn and experience.

From Stage to Boardroom

Bjarne has a somewhat unusual background given his current position as general counsel.  The son of a Norwegian diplomat and an American, he was born in Paris and moved around frequently as he grew up.  As such his childhood taught him to look forward and embrace where you are.

At high school Bjarne started acting and went to a theatre school in Boston.  A number of films and TV in Norway followed but Bjarne felt that on his return to the US something had changed in his outlook and he realised that he would have needed to commit fully to acting to succeed: it’s not possible to dabble as an actor.

As a result Bjarne double majored in political science but theatre studies were eventually dropped. An internship at the House of Commons then followed along with a Master’s degree at the LSE.  Following graduation Bjarne returned to the US in California for a gap year that involved a fair amount of watching LA Law.  Thinking that this looked like a “good gig” Bjarne went to law school, taking his Juris Doctor at The University of Chicago, where he found the course and subject to be a revelation.

The route to Pearson has been an indirect one taking in White & Case, Sullivan & Cromwell, Coca-Cola and Kimberly-Clark and offices in New York, Stockholm, Helsinki, Frankfurt, London, Vienna, Athens, Tokyo and Atlanta!

Bjarne joined Pearson in 2014 just as the decentralised global company was beginning to centralise.

Pearson started life in the 1840s as a construction business and has evolved significantly since then, taking in ownership of Madame Tussauds and the Financial Times before morphing into publishing and media, then education publishing and now into the world’s leading learning company, with involvement in all aspects of education, including adaptive learning technologies, English language training, educational publishing and testing and assessments.

Since joining Pearson in 2014, Bjarne has been knitting together a team of about 200 legal professionals, of which 100 are lawyers, who were spread around the globe in different parts of the business.  This task has not been an easy one and one of the issues he discovered was that everyone in the company had different ideas of the risks that the company faced.

The first year at Pearson was therefore spent identifying risks and then making sure the company had the right combination of technology and lawyers. Legal department costs were driven down by around 20% in the first 18 months and they are on track for another saving of around 15%.

The conversation then turned onto the subject of mentoring and Bjarne confirmed he mentors people both inside Pearson and outside the company.  From his own perspective he has received the benefit of three mentors who have all imparted different qualities, such as the importance of focussing on what you can change rather than worrying about things you can’t influence; being commercially minded and pragmatic; and the ripple effect that decisions have on others.

Asked what drives him, Bjarne said that he hates failing and thinks that whatever you do, you should be relentless at it. You should also do something that motivates you and makes you happy otherwise you won’t succeed.

Bjarne enjoys building things and motivating people but also cautioned the audience that you shouldn’t forget what’s important in life, your family.  Spend more time living your eulogy than your CV, as author David Brooks has said. Investing time in your family is important as “no one is going to talk about your PowerPoint skills at your funeral”.

The current backdrop to business and the legal profession are factors such as globalisation, risk convergence and cost pressures.  Bjarne noted that he likes to have manpower in-house to cover core areas of material risk, as then the expertise he needs is in place before issues arise rather than being brought in as a reaction to a developing situation.

The rise of technology tools is putting pressure on traditional law firm models and Pearson Legal is big on alternative business model law providers.  Bjarne mentioned several, including Axiom, Lawyers on Demand and, in New York, Hire an Esquire, which he described as the “Uber of legal providers”.

To wrap what had been a thoroughly entertaining talk Colin asked Bjarne what was the best piece of advice he’d ever been given.  Colin said that for him that advice had been “when the ball’s at your feet, make sure you kick it!”

Bjarne said the knowledge that 80% of success is grit and the rest is passion was important. Work out what your passion is and then roll up your sleeves!

Photos & Accolades for our LBDC Evening with Bjarne Tellmann

“What a fantastic evening listening to Bjarne and Colin ‘firestyle’. Bjarne is completely inspirational – clearly incredibly intelligent, thoughtful, passionate and driven, yet with a humble approach to his success which was very compelling and thought provoking.”

More photos and accolades on this link 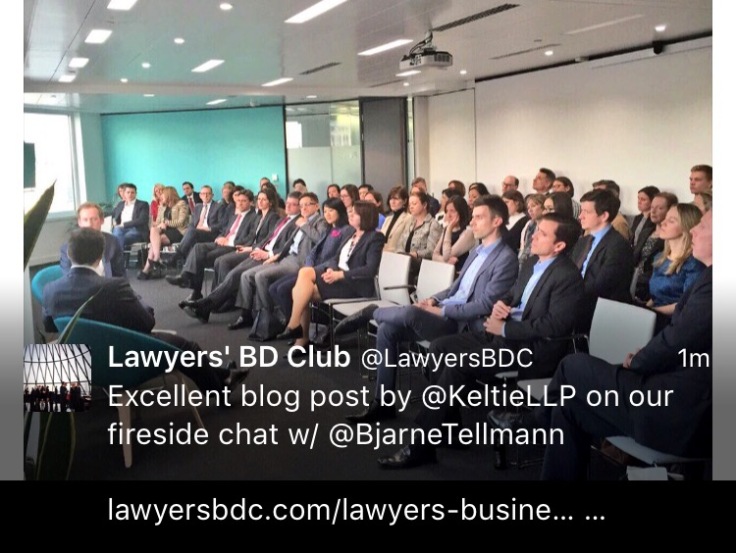